“The ups and downs of blood glucose”

When you eat sugary food (carbs), the sugar is extracted inside your intestine, and released into your blood stream. Your blood then transports this sugar to the cells that need energy. However, your cells cannot simply take up that circulating glucose from your blood stream. Cells have “glucose transporters” (a bit similar to doors) that are normally closed to glucose. These glucose doors can be opened by insulin, which is a hormone made by the beta-cells in your pancreas. 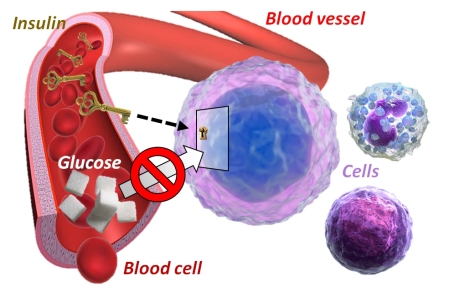 Glucose circulating in the blood stream cannot simply enter cells that need energy because the cell’s glucose “doors” are closed.

Insulin functions as a key that opens the cell’s glucose “doors” so that glucose can enter the cells.

Your pancreas consists of exocrine cells (98%) and endocrine cells (2%). Exocrine cells produce and secrete enzymes into your intestine to digest the food that you eat. Endocrine cells are clustered in small balls of cells called Islets of Langerhans (named after the German scientist Paul Langerhans who discovered them), and contain 5 different cell types:

Your beta-cells release a continuous flow of insulin into the blood stream, as all the cells in your body need to constantly take up glucose to fuel all the processes going on inside cells. This non-stop supply of small amounts of insulin is called “basal” (dotted golden flat line n the graph below).

When your blood glucose level goes up after eating sugary foods, a burst of extra insulin is dumped by the beta-cells into your blood. This temporary high dose of “extra” insulin (solid golden curved line in the graph above) on top of basal insulin reaches a peak activity after 15-20 minutes, but its activity has an effect on your blood glucose for several hours. 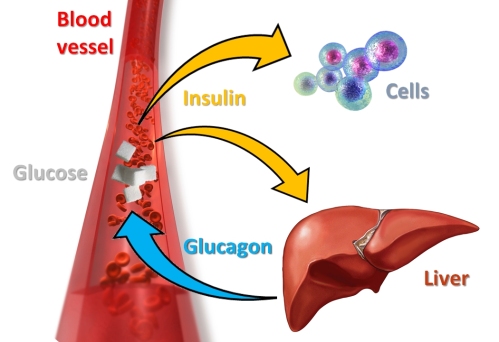 Type 1 diabetes patients do not produce insulin at all, because their beta-cells have mistakenly been attacked and destroyed by the patient’s own immune system.

Type 2 diabetes patients do not produce enough insulin and/or have become less sensitive to this hormone.

There are several other forms of diabetes (pre-diabetes, gestational diabetes, LADA, MODY, and also Alzheimer’s disease is considered a type of diabetes), that all result from insufficient or properly functioning insulin.

Because the insulin-producing beta-cells of Type 1 Diabetics are all dead, these patients need to inject insulin to stay alive. The amount of injected insulin has to be precisely adjusted so that the cells take up just enough glucose from the blood to keep functioning; too little insulin, and the cells die from starvation, too much and your blood glucose drops to dangerously low levels that can get you into a coma. The challenge these patients face is to maintain a constant basal insulin supply, and then dose the amount and timing of an insulin bolus just right for a carb-rich meal (or drink).

If the disease has not progressed too far yet, many people with pre-Diabetes or Type 2 Diabetes are able to manage their blood glucose levels by living a healthy lifestyle and carefully watching the amount of carbs they consume. They can also increase their cells’ sensitivity to insulin by taking medications (like metformin).

Another way to lower your blood glucose is by physical exercise. Your muscles use glucose to flex. They can take up glucose from the blood through a different mechanism that does not require insulin. So regular exercise helps lowering your blood glucose in two ways:

Also check out my website, becomeaninspiration.com and consider signing up for the personal diabetic lifestyle coaching or one of the online group workshops that I offer through video conference.

Click below to get more information about:
Coaching
Workshops

Keep an eye out for my next blog, and I hope to see you soon to get you started on the journey to your new life!

Dr. Dennis Van Hoof is a Certified Life Coach (CLC) with an academic PhD degree in Biochemical Physiology. By combining 20 years of first-hand personal diabetes experience with his in-depth scientific background, he developed a method to efficiently manage his own diabetes in a sustainable way. To learn how you can do this too, reach out for personal Diabetic Lifestyle Coaching or follow a group workshop that is specifically tailored to people with Type 1 or 2 Diabetes as well as pre-Diabetics and those at risk due to being overweight or obese. His clients thrive with their challenges and become an inspiration™ to others — with or without diabetes.

← Stuck with a 200,000-year-old blueprint
Timing for excellent diabetes management →

6 Comments on “Insulin and Diabetes”